Skip to content
Something that has been getting under my skin lately has been the way this country treats the Deaf community. Today I was reminded of that, but for whatever reason it is pissing me off more than it normally does.
Nyle DiMarco, currently gaining fame as a contestant on this cycle of America’s Next Top Model, posted a conversation he had via Twitter with American Airlines. Nyle is Deaf, and after he flew on an American flight with no captions offered on their in-flight movies, he commented to the company about the experience. 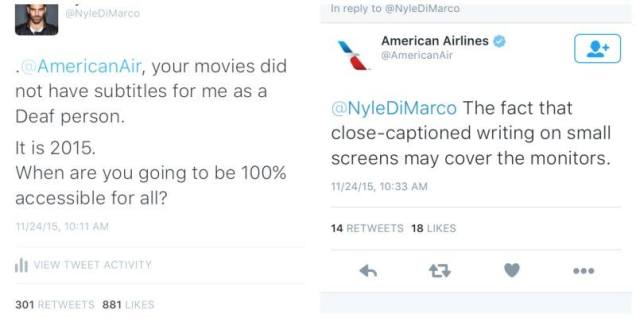 Nyle stated that after a seven hour flight, not having captions to be able to watch a movie was very frustrating (naturally!). What got me was the response by American Airlines stating that they don’t have closed-captions because they might cover the monitors on the small screens. I’m sorry, but I watch Netflix with captions on my iPhone (I currently have a 6, but I used to have a 4) and I can see the screen just fine without the captions covering what I am watching. Is it really that difficult to caption these comparatively larger screens without covering the monitors? I have reason to doubt that…so, then what? Is it just laziness that is preventing the airline to caption their movies? Or just plain ole audism? Audism is defined on Urban Dictionary as a term typically used to describe physical, cultural and linguistic discrimination against deaf or hard of hearing people.
Furthermore, because of my family’s recent move, I’ve been flying a bit more lately, and every time I hear the flight attendants give the safety speech (buckle your seatbelt, put the oxygen mask on yourself before helping children, etc. etc.) I wonder what they were to do if there were Deaf patrons onboard the aircraft. What would happen if, God forbid, something happened midair and the Deaf person’s safety was compromised simply because the flight attendants did not make their speech accessible. The only flight I’ve been on that has made successfully done so was Virgin America because they captioned their safety video. Granted, I might be missing a piece of information…I’m not Deaf and never been on a plane with someone Deaf, so I could just be blathering on for no reason, but it’s bothering me that airline companies are not as accommodating as they should be.
As I was watching the reactions unfold from friends in and among the Deaf community today about Nyle’s experience with American Airlines, one status stood out to me. It was from Daniel Durant’s fiancee, Bridget. She said, regarding the airline, “Why should they value any customer’s experience more than another’s? All are paying customers. Will Deaf get automatic good discount then since they don’t get the full services that are provided to other non-deaf consumers?”
This is exactly what I believe everyone should fight for. It’s basic equal rights, people. Why do the Deaf people in this country get treated less than simply because their ears don’t work as well as the rest of ours do? Why should Deaf people have to go out of their way to request these accommodations that are provided for everyone else without having to be asked?
Something has got to be done. And the Deaf community shouldn’t have to fight as hard as they have been fighting just so they can experience the world with the ease that us hearing people do. We, as a predominantly hearing society, need to take a step back and stop acting so elitist.
This country was built on the idea that “all men are created equal.” Let’s start acting like it.